Every year since 1981 the Society has held the Student Scholarship Competition. This year just under 200 works were chosen from more than 8,700 entries submitted by professors of college-level students nationwide. In a competition which can kick start a career, students bring their most sophisticated, well-crafted and original work to be tested. A jury of professional peers, including illustrators and art directors, selects the most outstanding works created throughout the year. Pieces are accepted based on the quality of technique, concept and skill of medium used.

Maryam Padyab’s sculptured tableaux titled “You’re Late” was one of the winners this year – congrats to Maryam (and to Professor Jim Hake who guided her). 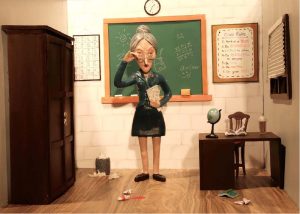