heather graham: Reminds me of M 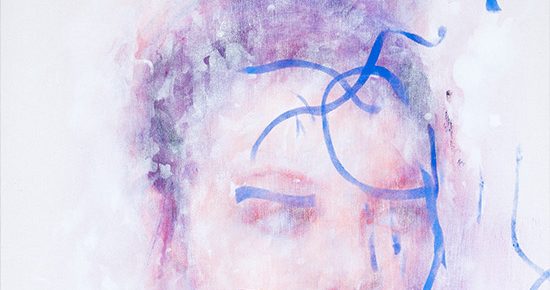 The concepts of time and memory, and the link between them are at the heart of Toronto artist Heather Graham’s work. Over a period of roughly a decade and through diverse media, Graham has recorded the passage of time as a gradual process of physical, visual change, and has explored its psychological effect on subjective perception and cognition. She sees images of people and objects in her paintings and videos as evidence and representation of time or as a way to capture and still its fleetingness. But this can only be achieved if the images serve memory, real, imagined or associative that generates a personal meaning.

In Graham’s monochromatic painting series of close-up faces, the spectator is confronted by unidentified, generic and vaguely perceptible renderings of women. Using minimal paint to both create and erase an image, first by broad applications achieved through household paint brushes, and then by elimination through rags, the artist incites tension between appearance and disappearance, presence and absence.

Anonymous faces come into focus only at a distance; the closer one approaches, they begin to dissolve into atmospheric chaos. The spectator is taken on a journey from one state to another. It is a simulation of the course of time from beginning (life) to end (death). Graham forces the spectator to take his/her time, to carefully observe as the images materialize or recoil depending on the point of reception. The spectator’s engagement is essential to the eventual manifestation of the faces as if emerging from the fogginess in which they are enveloped. Without the spectator’s gaze confronting and beholding the image, it cannot be brought into view, nor the face into a metaphorical existence.

In a secondary series of faces of young women, Graham depicts some with full or partial body form. This time she introduces colour, albeit still employing a restricted palette of reds and blues veiled in white. The idea of time as a process of actualization in space is yet again insinuated through the semi-materialization of the image from an infinite and nondescript background to which it remains linked, never to be fully and independently formed. But here, it is nostalgia, conveyed through subtle, soft colouration of idealized, youthful faces that best suggests an idyllic far gone era, perhaps a reminder of innocence lost that leaves the spectator with a feeling of emptiness, melancholy or regret.

Graham further examines the idea of the spectator as a necessary participant, if not an indispensable component of an artwork, in her videos. The videos demonstrate random interplay of light and shadow on blank surfaces, and indistinct, suggestive shapes that metamorphose into blurred and mysterious visions. These symbolize a continuous state of transformation when one thing replaces another, and to which the spectator stands as witness. Physical changes can only be understood through the private connotations they arouse in the spectator.

The spectator is often inserted into the work as another objectified projection, an interruption or a modifier of events. Reminded of a personal experience, a feeling or a thought, the spectator can fill in the unknown and complete the work thus giving it a subjective meaning that would soon be redefined by the next encounter with another visitor.